MAAP garage, short for Madison Automotive Apprentices, is a Porsche restoration shop/coffee shop located in Harrisonburg, Virginia. Affiliated with James Madison University and is recognized as a JMU building. Address: 1070 Virgina Avenue MSC 4812 Harrisonburg, VA 22807. The owner of the facility is Cole Scrogham, a Porsche motorsport specialist that has acquired decades of track engineering experience, behind the scenes of Porsche production testing, and restoration of Porsche’s precise automotive engineering. Cole’s oldest son Michael Scrogham works alongside Cole with their restoration projects while also running the MAAP Coffee shop inside of the garage. MAAP Coffee shop is one of the best places to get any type of espresso drink. Michael is a 2016 JMU engineering alumni. His engineering capstone project that was done over the course of two years and focused on developing an energy efficient solar powered espresso machine. He continuously is developing his methods for producing high quality espresso drinks with new uncommon methods such as aeropress and pour overs. MAAP incorporates their years’ worth of Porsche engineering experience in all they do.

MAAP garage is very young and still has plenty of room for growth. At the moment they provide focused institutes on specific subsystems in automotive mechanics for their students. As well as trying to provide internships with automotive experts. Right now they have a JMU engineering student working at MAAP as a paid intern to help them with their multiple restoration projects that they have laying around their garage. Cole sent 4 MAAP students to Amelia Island, Florida as an internship opportunity to work with auction experts of very expensive vehicles. They were able to get hands on experience with a wide range of rare vehicles that you most likely would never see driving on the roads today. The opportunities opening up at MAAP are just getting started and are very undervalued at the moment. I believe within the next few years MAAP will make James Madison University the number one option for students interested in the professional motorsport field.

I was apprehensive to watch Boss Baby, actually I had no intention of watching the movie. There are numerous activities that I would rather do than watch Boss Baby; be stung by a bee, get kicked in the heel by a scooter, eat burnt toast, etc. Boss Baby seemed like another film that DreamWorks rushed out of production and into theatres to make a quick buck, with no intention of putting thought or effort into the plot. The hatred I felt for Boss Baby arrived immediately after I saw promotions for the movie. I didn’t understand how anyone could be interested in seeing a movie where the main character was a baby that wore a suit and had a stupid smug grin on his face. The trailer alluded to cheap jokes about business and baby stereotypes and didn’t seem to delve deeper into what the Boss Baby’s mission was about. The trailer disgusted and confused me in one sitting, therefore my interest in seeing the movie was non-existent. Before Winter Break, my suitemate, Jenny, showed us a clip from Boss Baby, one that she laugh-snorted at every time, and she told us that we had to watch the movie because it was her favorite movie. I was intrigued by how my suite mate could deem this movie her “all-time favorite,” and when I asked her why she responded, “You are just going to have to watch it, I can’t explain it.” After receiving her vague answer, I decided to make a movie night out of it, thus the entire dorm was going to watch Boss Baby. 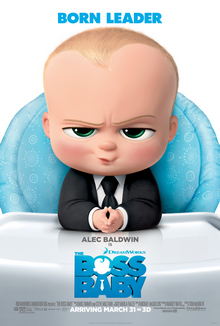 “Considering that it’s based on a cute but pretty story-lite picture book, this animated comedy exceeds expectations — especially if you’re a fan of Baldwin’s work on 30 Rock.”

“The animated feature The Boss Baby has some hilarious moments. If, that is, you’re a grown-up.”

So, it seemed my initial review of the movie (before watching) wasn’t that far off from final reviews by critics who had seen the film. While my initial review was more demeaning and harsh, many critics and ratings appeared to like the movie, but not love it. I had no intention of liking this movie, however seeing the reviews made the movie seem less daunting than it was. After reading the reviews, I decided to read a synopsis of the plot, to give myself another perspective of what the movie was going to entail as opposed to the trailer.

“A new baby’s arrival impacts a family, told from the point of view of a delightfully unreliable narrator — a wildly imaginative 7-year-old named Tim. The most unusual Boss Baby (Alec Baldwin) arrives at Tim’s home in a taxi, wearing a suit and carrying a briefcase. The instant sibling rivalry must soon be put aside when Tim discovers that Boss Baby is actually a spy on a secret mission, and only he can help thwart a dastardly plot that involves an epic battle between puppies and babies.”

The review didn’t provide any more detail than the trailer did, I was still unable to grasp the concept of the Boss Baby’s secret mission with puppies. I was interested to see where Tim came into the plot, his character’s imagination seemed like an interesting trait that wasn’t discussed in depth. At this point my life had been consumed by Boss Baby, roommates talking about the funny scenes, reading pages of reviews, and drowning myself in plot summaries, it was finally time that I sat down and faced my fears.

I was dreading a night watching the bad jokes and awkward animated faces for an hour and a half. As I sat down and watched the introduction credits roll by I could feel myself getting more and more worried, but to my surprise I enjoyed the movie! Watching the movie, I couldn’t stop laughing, the jokes turned out to be delightful and funny, with enough jokes for kids and adults. The kid jokes were stupid enough that older audiences could get a chuckle, but the adult jokes hidden between the lines were great!  The plot, while it had some holes, was touching and light-hearted, and concentrated on the bond of two siblings. The characters were well thought out and used their own talent to their advantage throughout the movie.

Boss Baby was a touching story about how genuine the love for our friends and family are, and how we can only love something as we build a relationship with it. Tim and Boss Baby hated each other at the beginning of the movie, but after working together, finding out their passions and their fears, and learning what it means to give up something you have always wanted in order to keep a friendship, they were able to finally come together and love each other as a family. Anyone with siblings can relate to the basic plot; jealousy towards the new addition to the family, and then the irreplaceable love that each and every sibling finds in their life. The cluelessness of the parents that feels so incredibly real to kids was conveyed perfectly by the movie and was something that as a kid I could relate to. The movie is a great film for all ages, as both parents and children can relate to the characters. The hour and a half long movie captures the entirety of a sibling’s bond, the hatred of the unknown, and then the never-ending love for each other. My journey with this movie was similar, hatred and then love.

Looking to watch a new movie, maybe something that you hate, but might end up loving? Watch a movie at the Grafton-Stovall Theater! April movies include; Jumanji: Welcome to the Jungle, Star Wars: The Last Jedi, and The Avengers. Tickets are only $3 and popcorn is just 50 cents. Don’t forget about the FREE advanced screening of Truth and Dare on 4/10 at 7p. There is also a FREE outdoor screening of The Avengers on 4/20 at 7p on Festival lawn.